Take a Champagne Tour today. Let’s begin a brilliant {and healthy!} New Year with champagne. Champagne is such part of France’s culture. Delicious, and sparkling, it can only be called champagne if it’s made in a particular region of France, about two hours out of Paris. Let’s toast this new year with a visit to the village of Aÿ, on the River Marne just outside of Epernay,  Its Grand Cru vineyard was one of the first planted in the Champagne area, the historic hillsides are classified as a World Heritage place by UNESCO. Let’s Take a Champagne Tour to Bollinger.

The Bollinger Champagne Maison is legend, the Champagne House story would make a fascinating movie or series. Navigating through two World Wars, Bollinger received the Royal Warrant from Queen Victoria in 1884, naming it the official champagne of the English Court, and became the champagne of choice for James Bond. 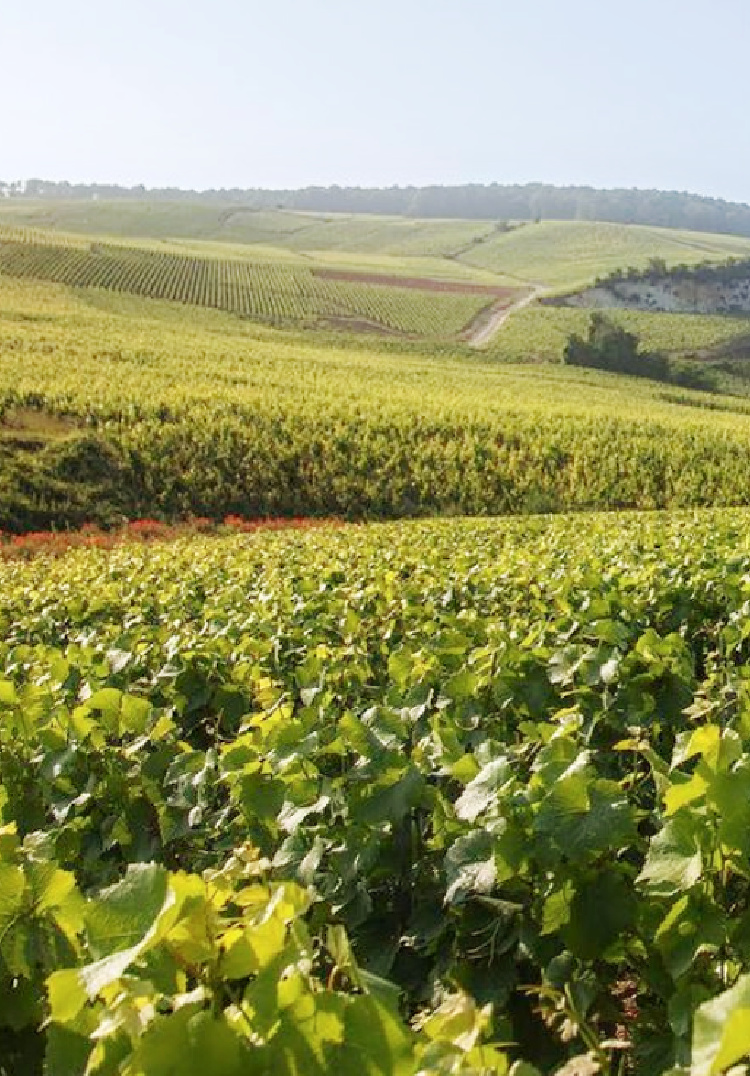 Founded in 1829, the story begins when Athanase de Villermont inherits a large estate in Champagne. Because he was an aristrocrat, he couldn’t be in business himself of making/selling champagne.{!!} He met Joseph Bollinger and Paul Renaudin, who were both very enamored by champagne, and together they formed the firm of Renaudin-Bollinger & Cie on 6th February 1829. Joseph was in charge of sales, Paul was in charge of the cellars. Their legacy continues today, Bollinger is one of the greatest names of all the Champagne Houses. 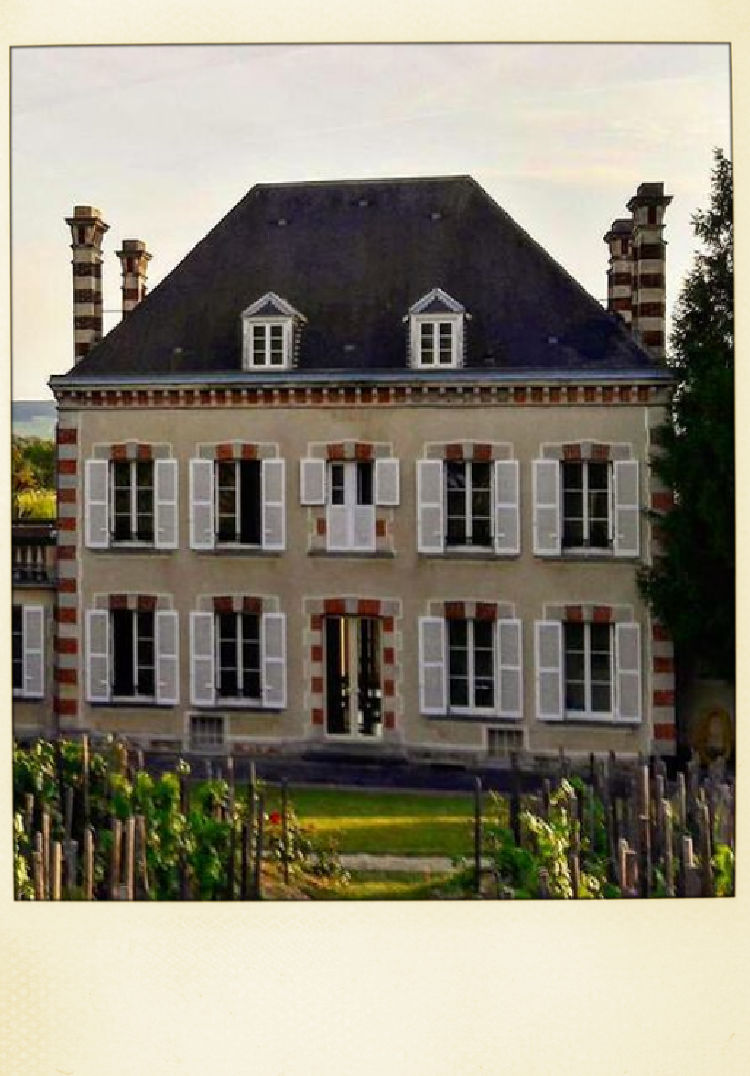 In 1837, Joseph Bollinger, Jacques Bollinger’s son, married Louise-Charlotte de Villermont, Athanase’s daughter. This marriage was the beginning of a “Family House” that has been passed down from one generation to the next. In 1884 their sons, Joseph and then Georges, took over the business. From the phylloxera crisis to the turmoil of the Great War, they faced difficult years and challenges, but Bollinger extended its vineyards and gained widespread admiration. 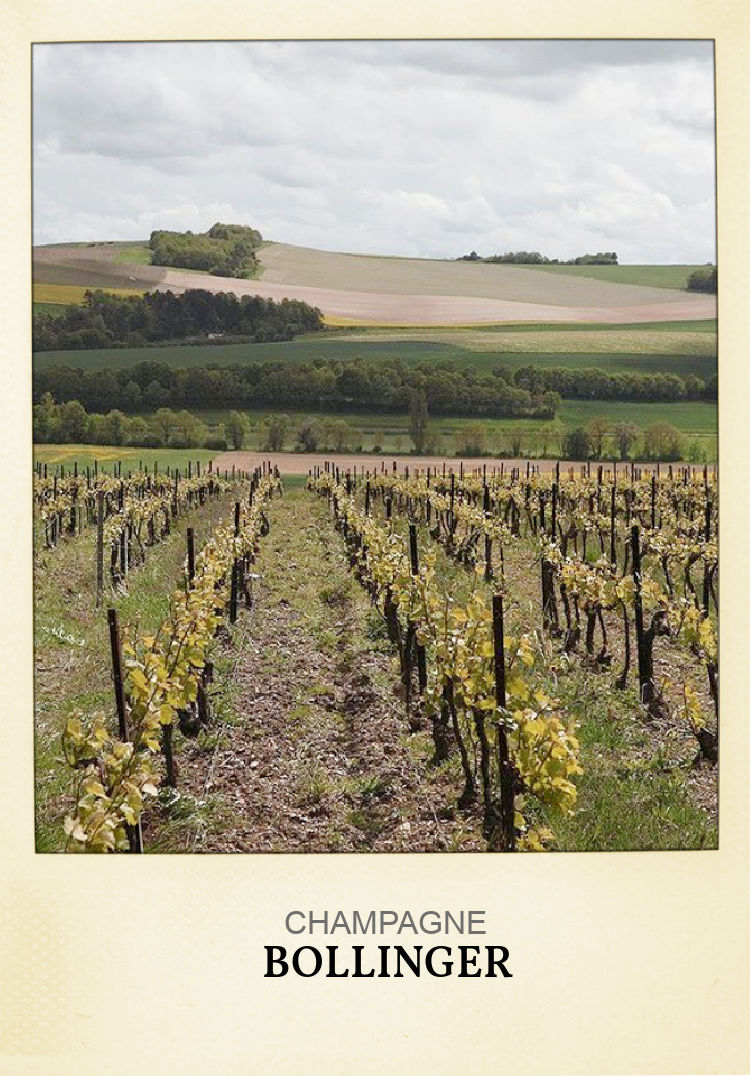 In 1920 Jacques Bollinger, George’s son, was in charge – a heavy burden for a 24-year old. He faced the challenge with courage, Helped by his cousins Pierre and then Yves Moret de Rocheprise, the family courageously faced every challenge. Jacques was sophisticated, cultivated {read=quite a charmer} and spoke fluent English, he increased Bollinger’s fame in England as well as in the rest of Europe. He guided Bollinger with wisdom through the difficult years of recession and WWI, and as Mayor of Aÿ he was committed to protecting his village. 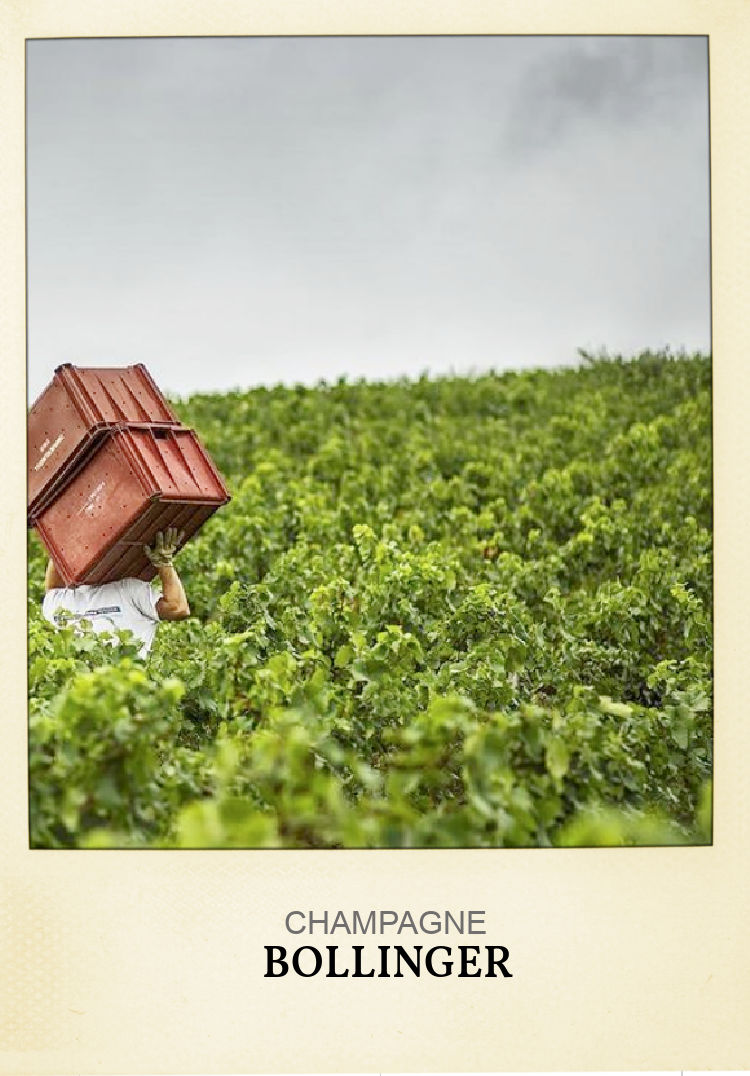 When Scotswoman Elizabeth Law de Lauriston-Boubers married Jacques in 1923, she became passionately involved with Bolliinger’s destiny. She was only 42 when she lost her husband in the war. With great dignity she stepped in to take over. “Madame Jacques” or “Lily” as her family called her, threw herself heart and soul into her new role, her natural grace and charm endeared her to everyone. During the bombing of Aÿ in 1944, she worked hard to support victims , helping the wounded, the homeless, and comforted families. Her bravery was later rewarded with a commendation from the British government.

Here is Lily, with a quote about champagne she is famous for. 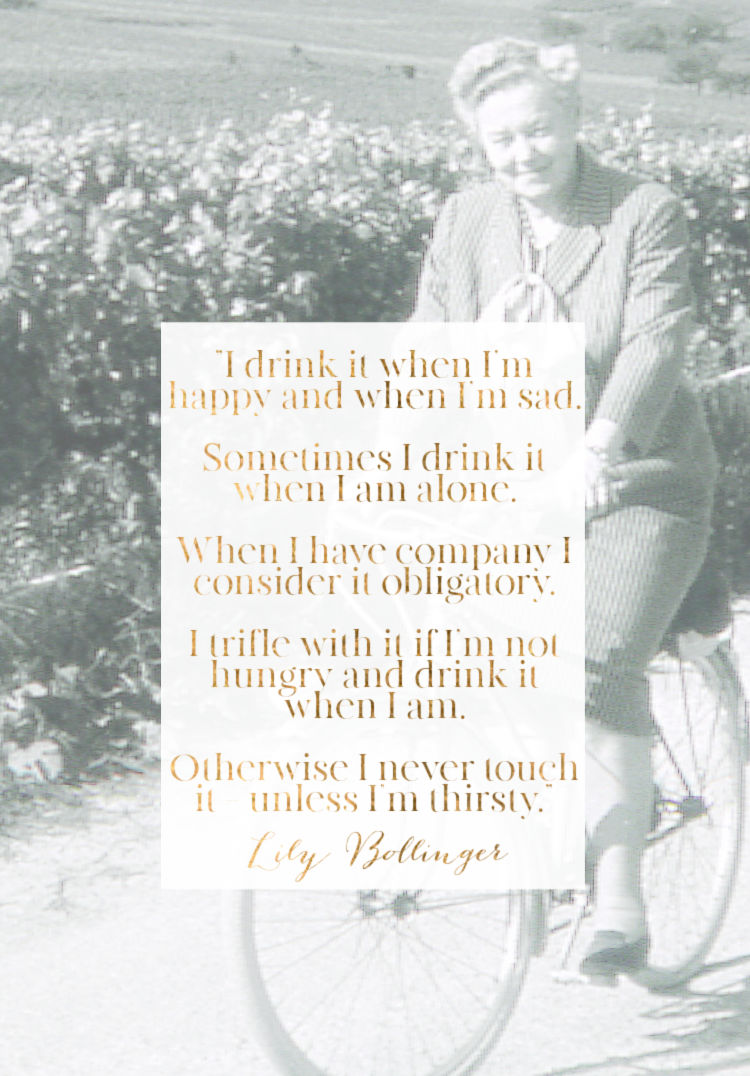 During the 1950’s and 1960’s Lily promoted Bollinger champagne consistently. Bollinger became the official champagne for the James Bond films. Bottles of Bollinger champagne were seen in the films with Roger Moore, Pierce Brosnan, and Daniel Craig. {Bollinger was the champagne served at Prince Charles and Lady Diana Spencer’s wedding.} 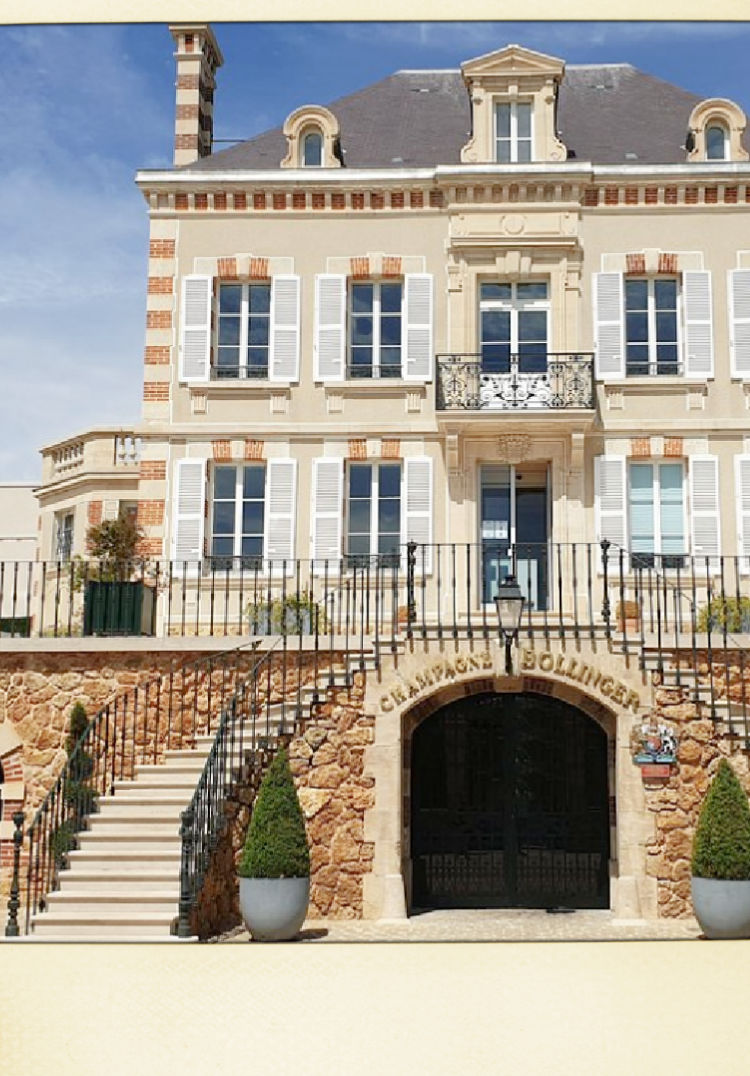 Today, the family still owns and operates the Bollinger Champagne House. If you travel to France, you can take a tour and taste the champagne. 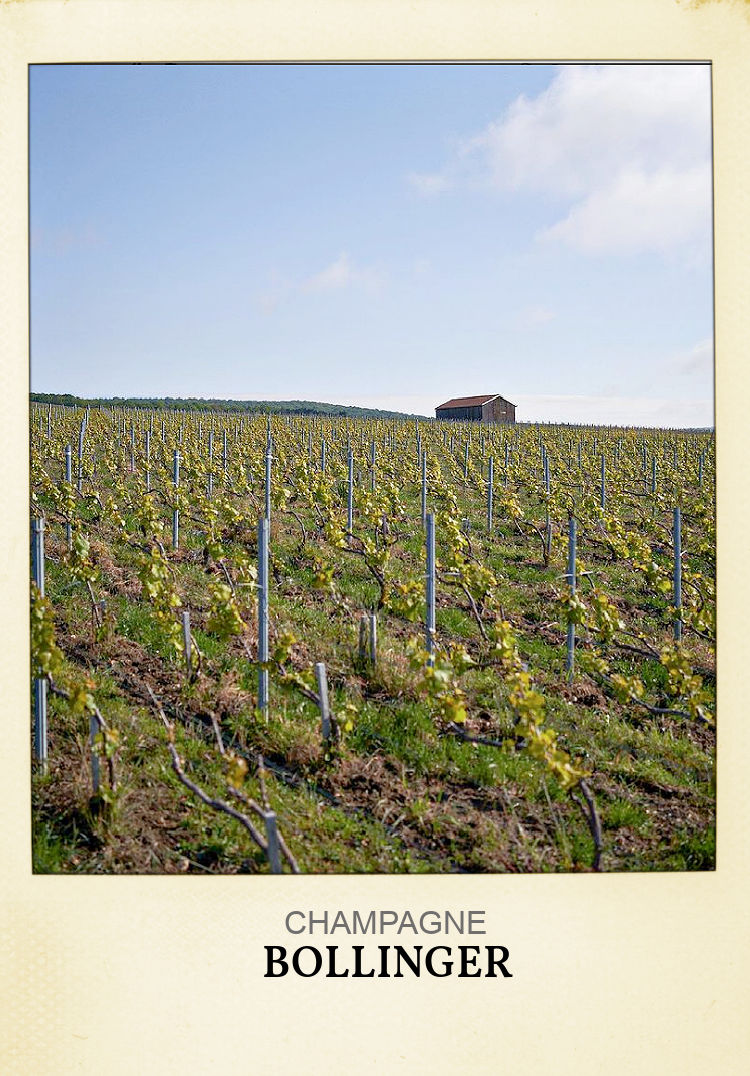 If you are arm-traveling, this is a fun virtual tour to watch of the discovery of a part of their cellar. In 2010, while taking an inventory of the House cellars, an abandoned wine cellar containing bottles and magnums of reserve wines was discovered. It was clear that they were very old. Hidden behind a wall of empty bottles, this forgotten cellar had miraculously preserved small wooden panels used to identify the bottles. The research work carried out in the House archives revealed that the mysterious inscription, CB14, mentioned on some of the bottles, corresponded to the 1830 vintage, the first year of bottling.

{side note: oh! How I would have loved to be there then! I love nothing more than discovering treasure in old, forgotten places.} 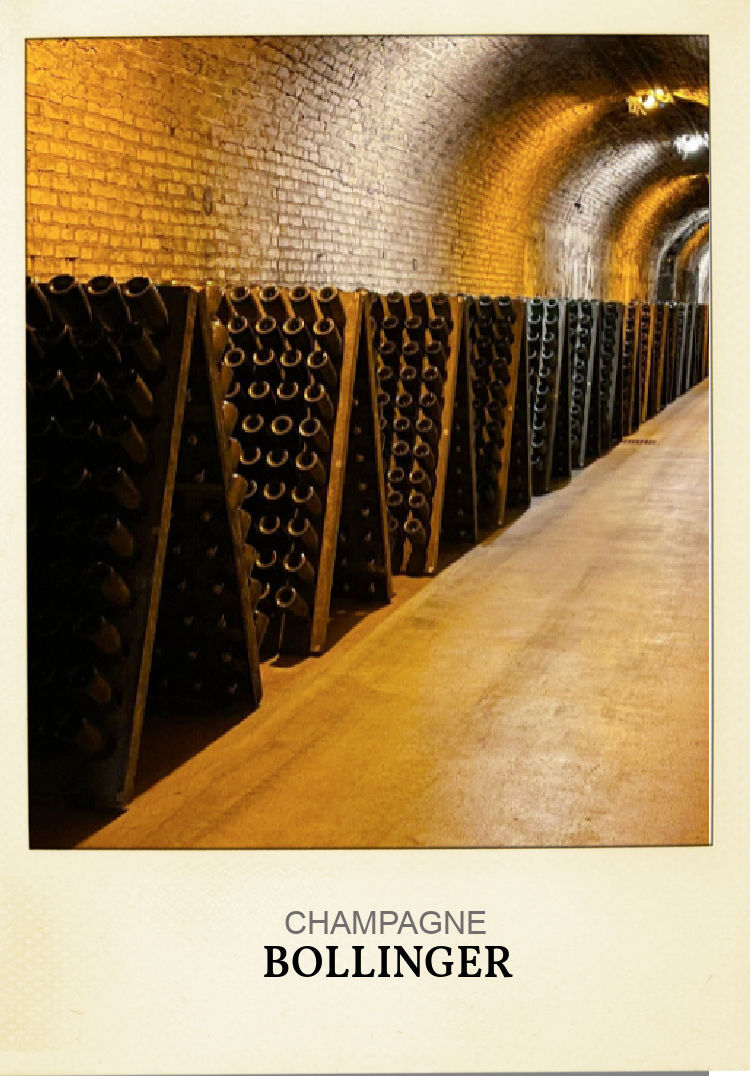 It took me a while to click around the cellar and read some of the history of this family and this Champagne House, but it was great fun. 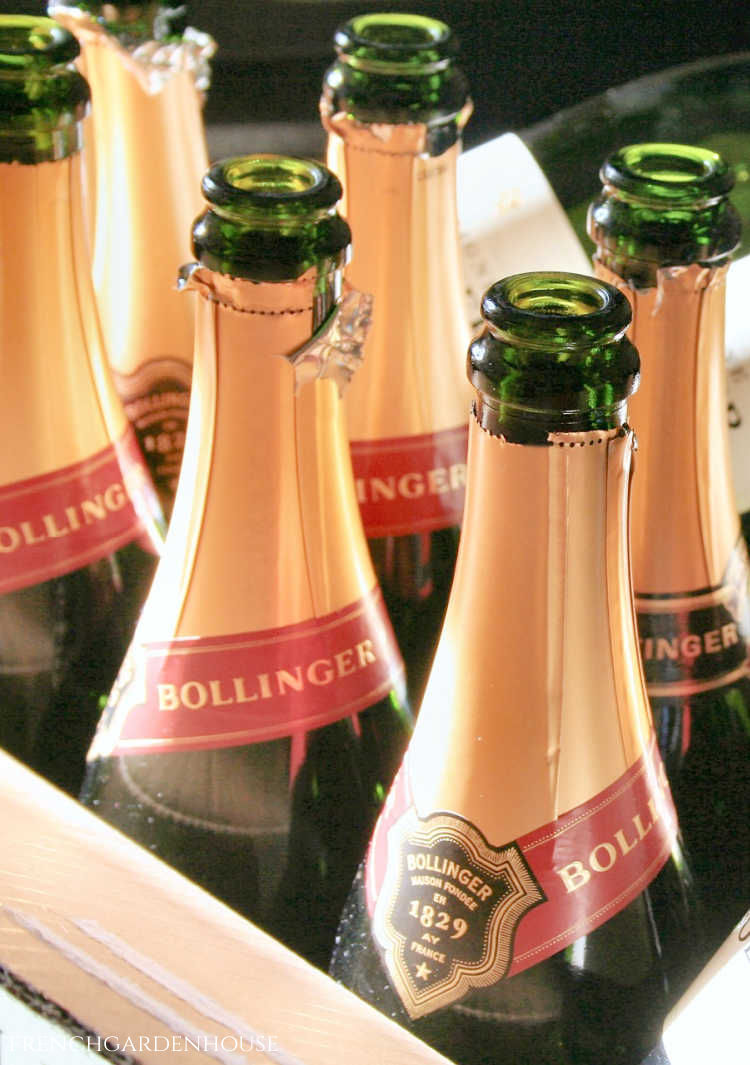 If you love champagne, we have several fun vintage Champagne baskets that just arrived!  The one below still has the paper-pulp covers for the small bottles of champagne inside! A great display for your wine cellar, or bar area. 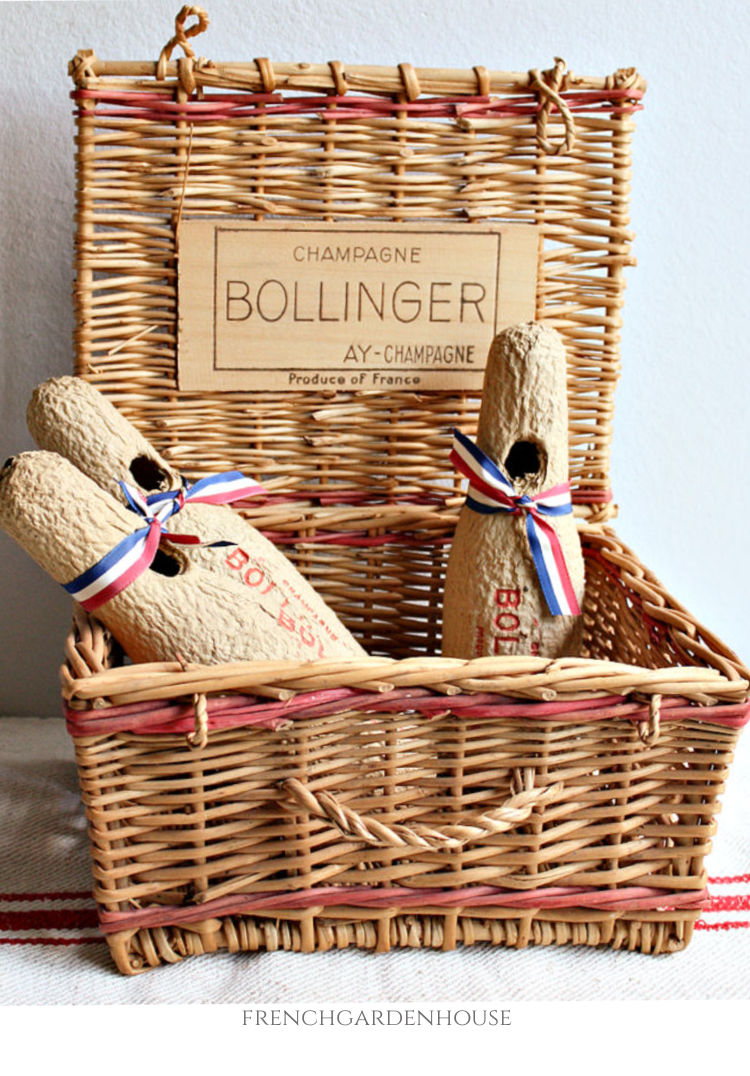 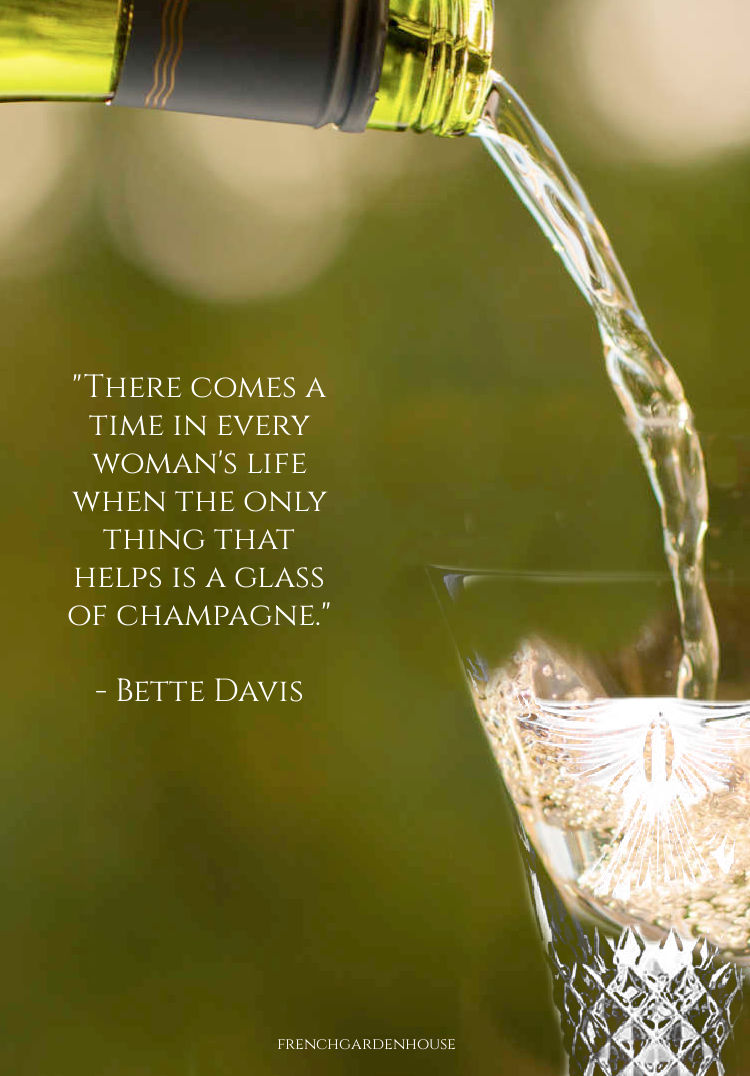 Thank you so much for joining me today. I’ve added some champagne and wine related antiques to our online shop, many more to come! 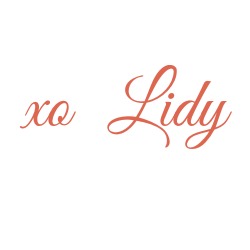