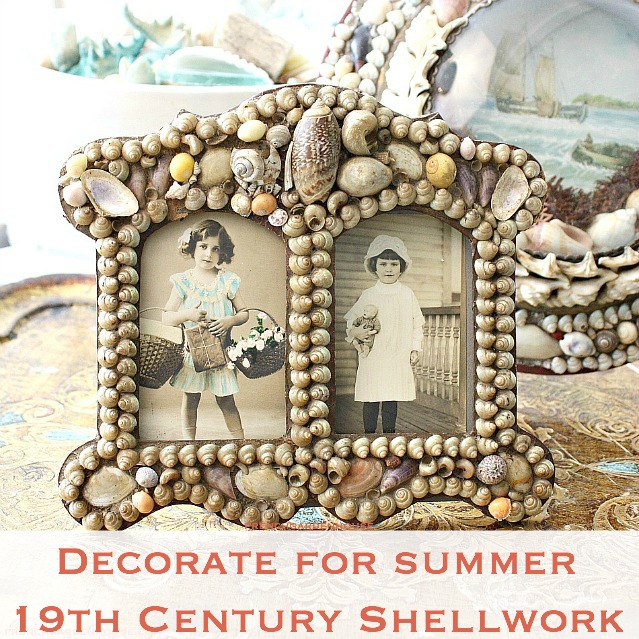 Summer is almost here! As the season changes to warmer summer months, I can’t wait to refresh my living room and dining room’s look to reflect the carefree, more casual feel of summer.

We live near the ocean, so shells play a big part in my summer time displays. I group shells together in a clear vase and use that as a centerpiece on my dining table. Shells surround the candle in my living room. But my real love? Victorian Shell Work. 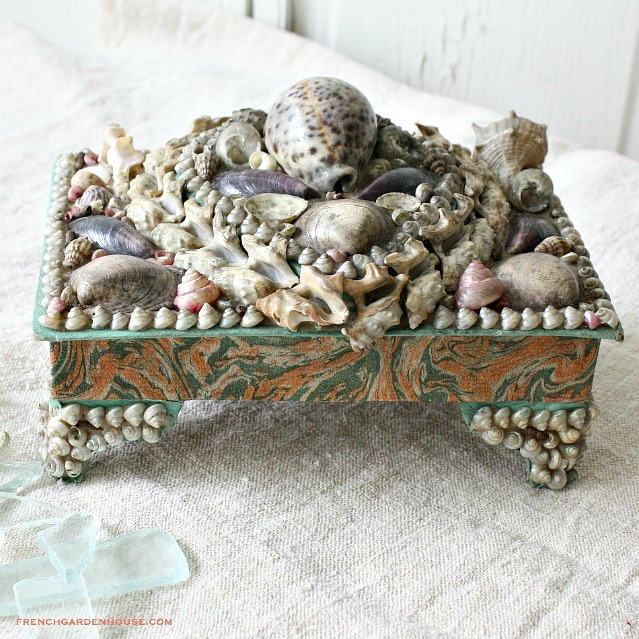 Throughout history, shells have been beloved and used for decorating objects for interiors. Dutch merchants opened a market specifically to sell shells, cabinets of curiosities were so popular with the upper classes in Europe that the demand for shells was very high. Architects were designing and creating grand “grottoes” covered in shells in many of the noble estates on the continent. Meant to be a complement to Italian Renaissance gardens so in favor, the shell covered grottos copied the ancient Roman ones. 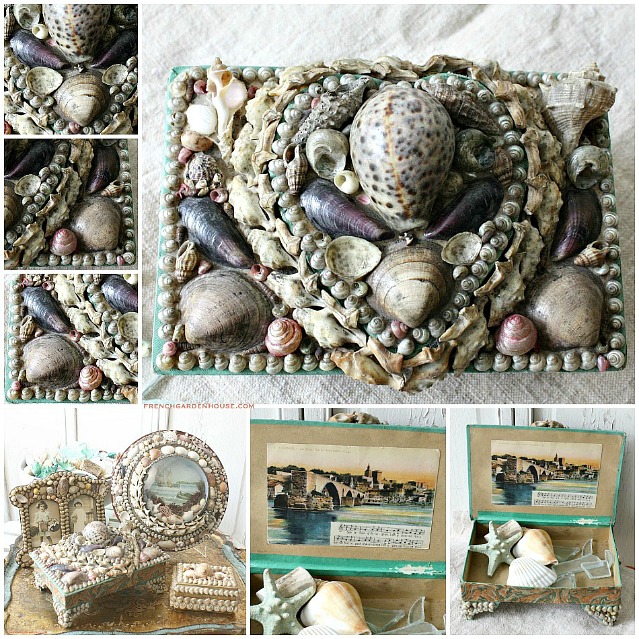 The French Queen Margaret, first wife of Henry IV of France, commissioned a shell grotto at Issy-les-Moulineaux, the “Grotto of Thetis” at Louis XIV’s Versailles was built in 1665. A century later, Louis XVI had a shell cottage built at Rambouillet for Marie Antoinette. 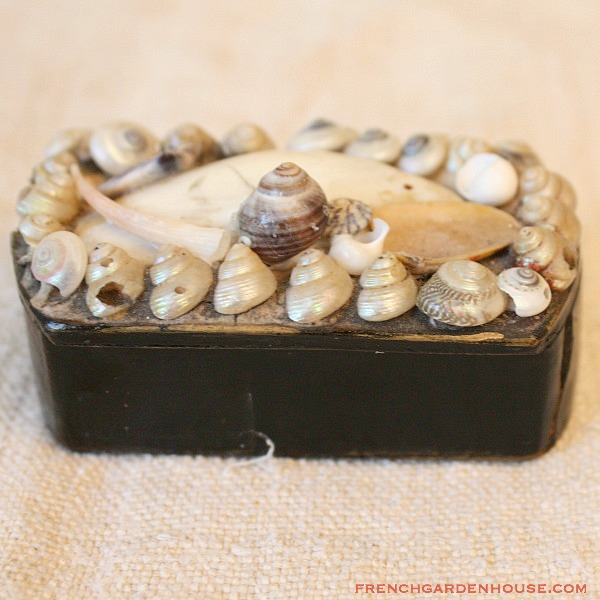 Shellwork, grottos, and grand scale furniture either covered with shells or meant to imitate shells remained popular throughout royal houses during the next century, but it wasn’t until the 1800’s that shellwork truly came into vogue for the upper and middle classes. As ships brought back entire cargoes of shells for the whims of the aristocracy, it’s not surprising that covering smaller objects with shells soon became “en vogue” with ladies. Victorian ladies could purchase shellwork supplies in Mrs. Roberson’s shop on London’s Grosvenor Square, packets were sold with shells already sorted and accompanied by printed patterns for forming shell flowers, boxes and frames. Every major city in Europe had such shops, and shellwork became a pastime many enjoyed, young and old alike. 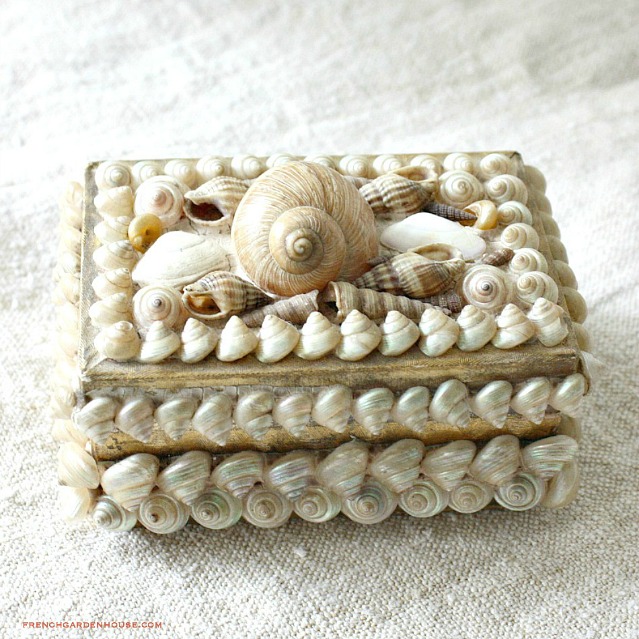 At the same time, enterprising men and women who populated the port towns of France, Holland, England etc. found a way to craft and sell their handmade little “shell souvenirs” to bring much needed income to their households.  While it is true that some sailors might have created shellwork items, it was more common for them to purchase shellwork souvenirs in a port where their vessel stopped. 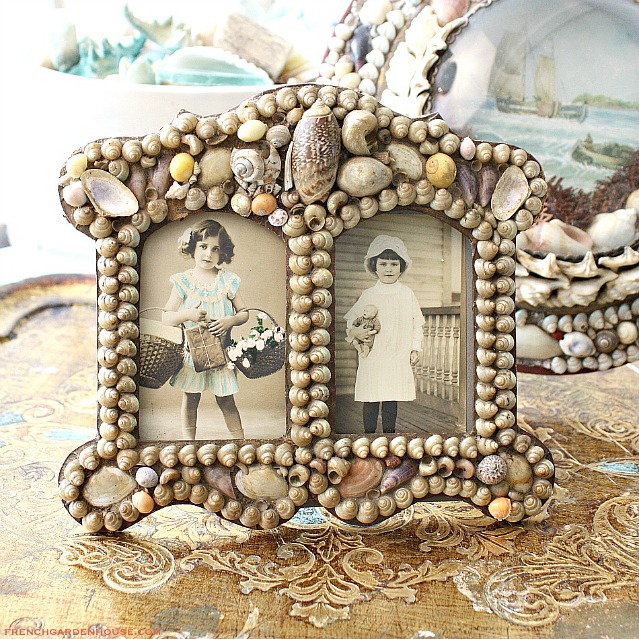 Sailors, after spending months away from their family, girlfriends, wives and mothers were eager to purchase a small souvenir to let these loved ones know they had been in their heart and on their mind. 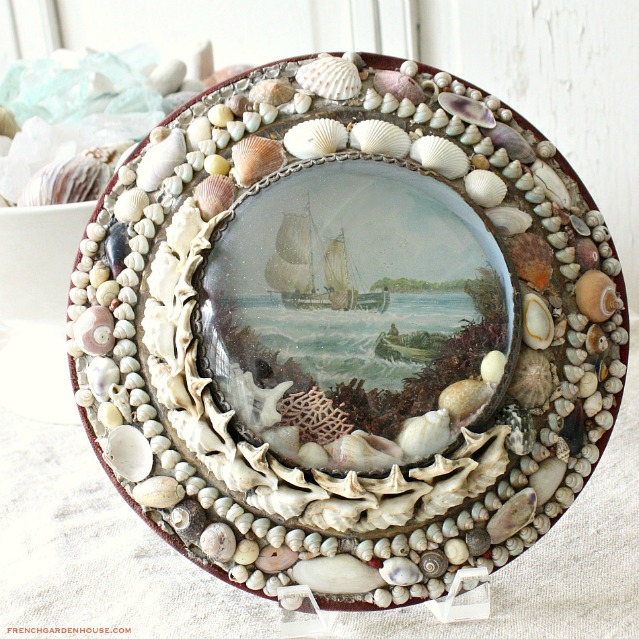 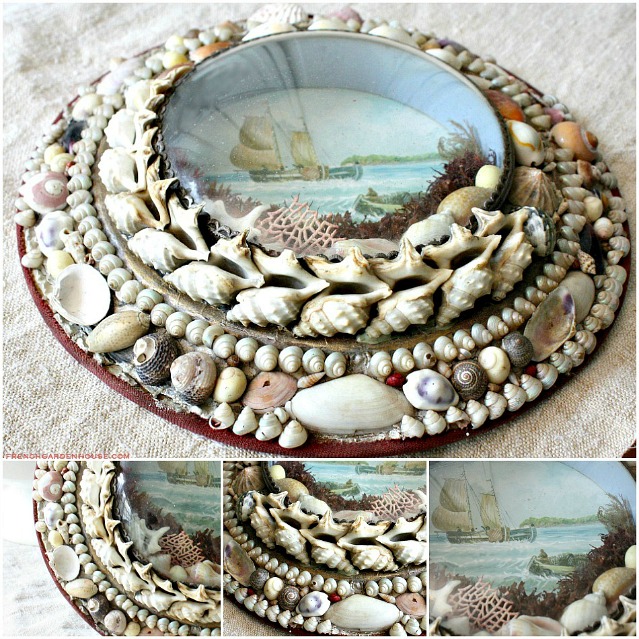 Most of the shellwork souvenirs were designed for women, small boxes, sewing drawers, little frames, small, sweet mementoes that a sailor could either ship or tuck into his “kit” to bring back home. A shellwork industry sprang up world wide in many busy ports. The perfect way to convince a sailor’s wife, or bachelor’s sweetheart that he was thinking only of her during his long voyage at sea. Among the most popular souvenirs were shell roundels, sometimes called “bull’s eyes,” which had colored prints of clipper ships and fishing boats under domed glass coverings. The foreground featured dried seaweed, moss and coral. The shell encrusted frames were usually circular or heart-shaped. Getting extremely rare to find, and avidly collected, the roundels, or portholes as they are also sometimes called, are so decorative, they look beautiful together with a grouping of shells. 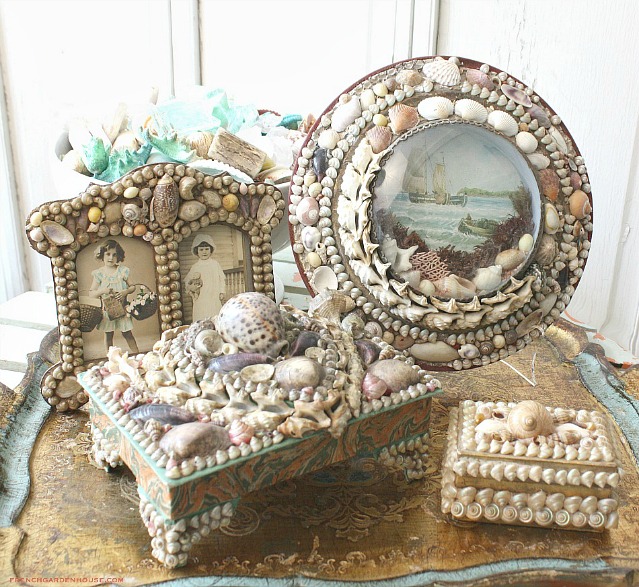 What do you like to decorate with in summer?